For the last 3½ years, I have been experiencing various chronic arm pain.

My body has been giving me hints that it was not taking the load of work at the computer I threw at it well for about two years before then, but I did not listen.

The first pain that became so severe that it prevented me from working was from the carpal tunnel after intensive graphic design sessions, guitar playing, programming, and working with digital devices in general.

After unsuccessful, uneducated attempts (wrist rests, wrist wraps), I was forced into a more direct approach.

The first products I tried were from Connect IT, which had a long-term marketing campaign focusing on ergonomics, so I decided to give it a try.

I bought the Verti ErgoMax and a mouse pad with a wrist wrest which they marketed for use with their vertical mice for heightened ergonomics.

You cannot use a mouse pad with ergonomic mice; it does not work. Try laying your hand on the table as if you were holding one – there is no space. After several months of use, the mouse broke down, and I returned it. After several experiences, I recommend avoiding this company. 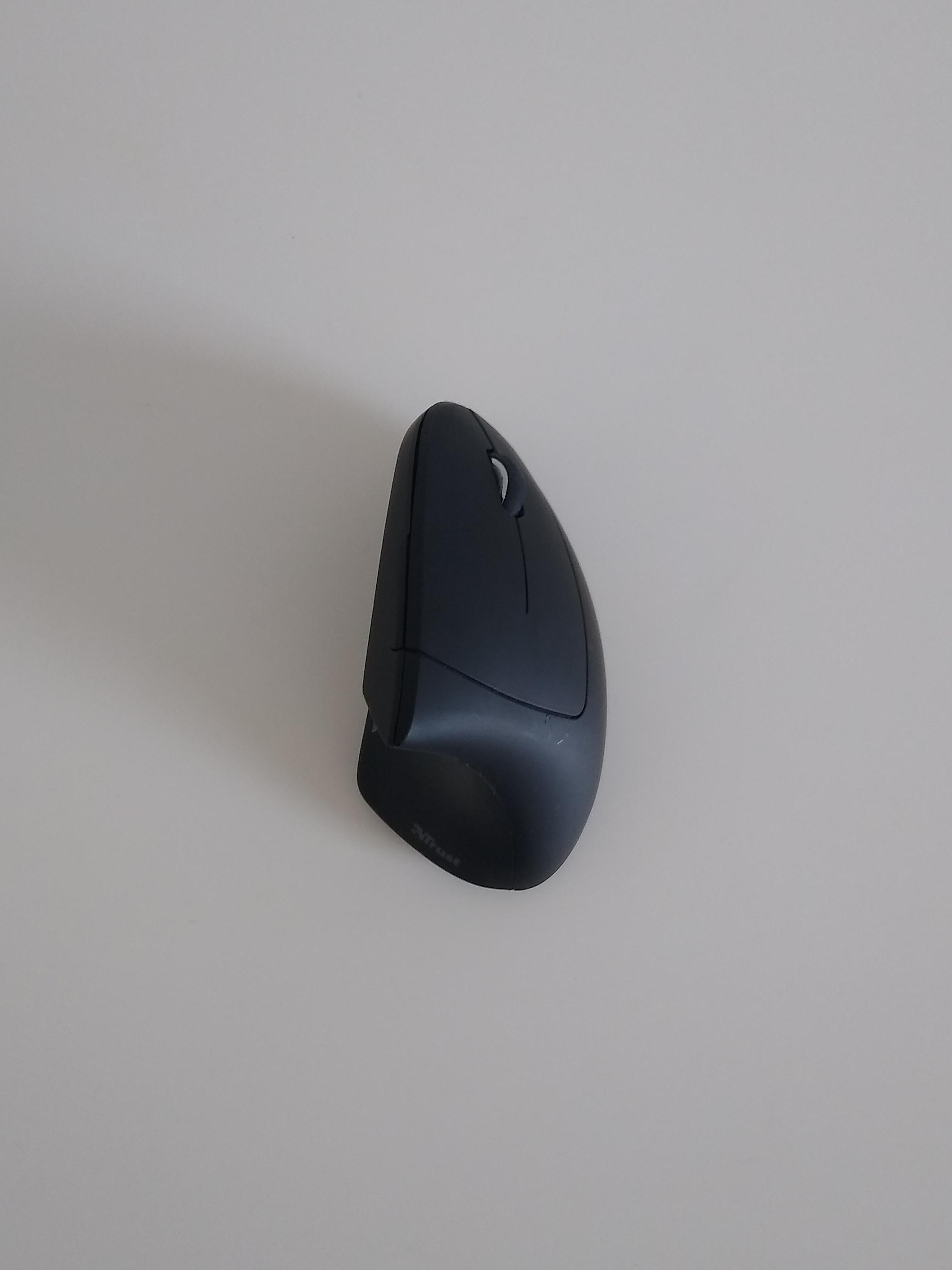 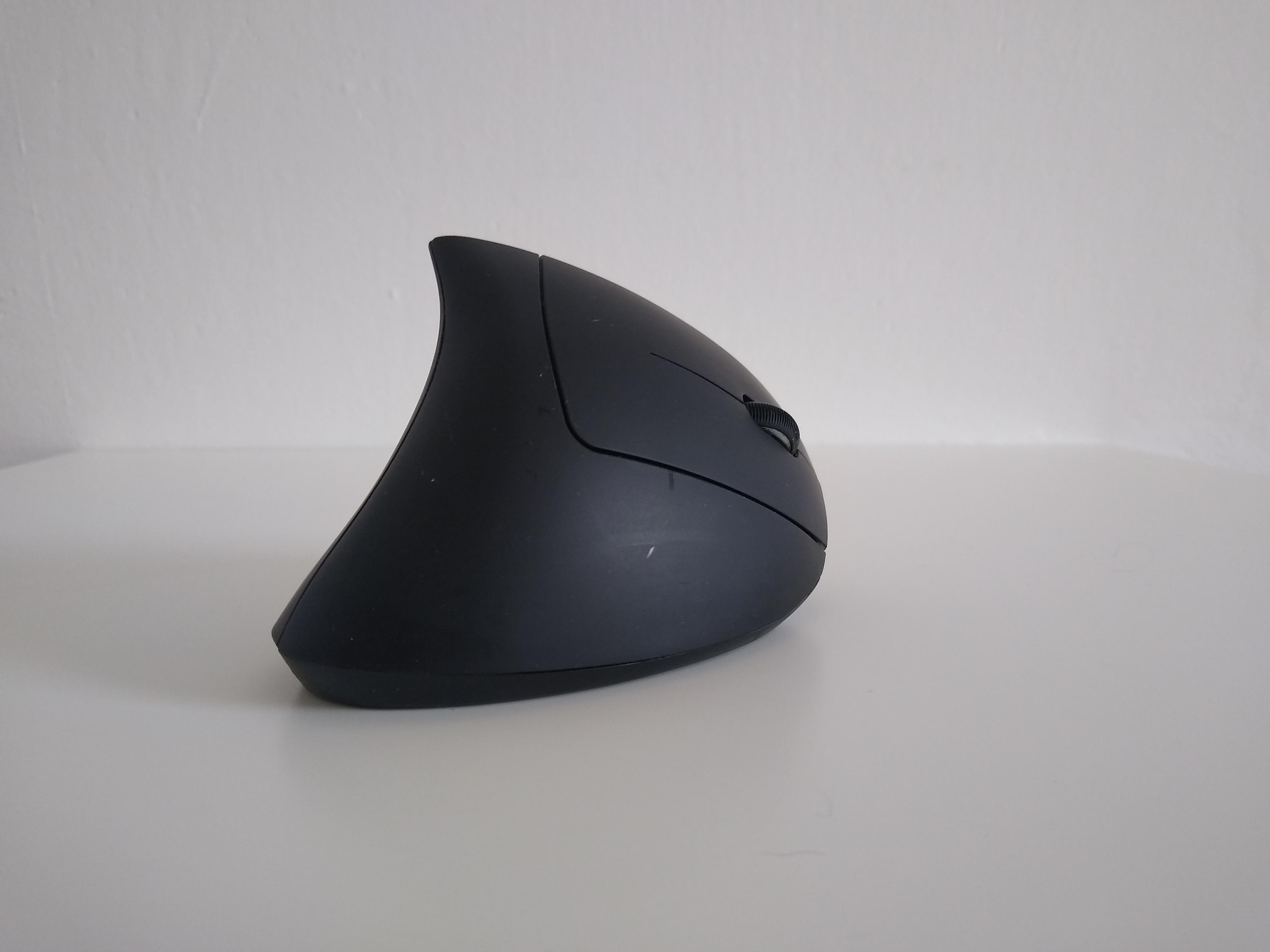 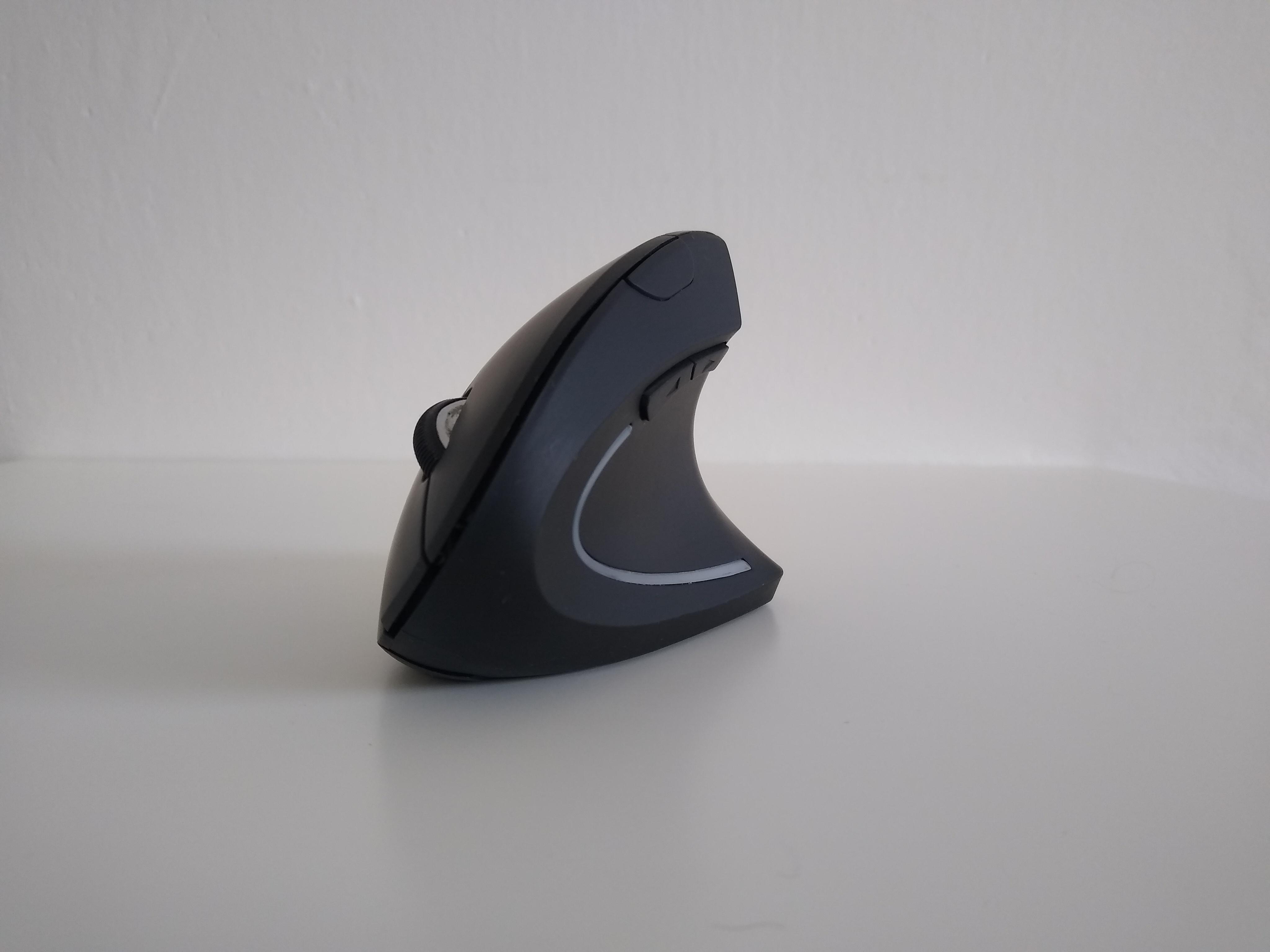 I have heard good things about the Anker Vertical mouse. It’s almost impossible to get it in Europe, but I later found out that the Trust Verto was the exact same mouse, down to the renders they used to market it.

It was my daily driver for 6 months and eliminated my wrist pain. I became a big advocate of vertical mice – this article was initially supposed to be about them.

After six months, the honeymoon ended. The mouse wheel started malfunctioning to the point of being unusable, and more importantly, health issues started arising.

While the vertical mouse model works wonders on the carpal tunnel, it introduces excessive stress on the forearm muscles, which are used to press the buttons, as you have to squeeze your hand slightly to prevent your mouse from moving when clicking.

After almost a year of usage, I was no longer capable of using a vertical mouse. 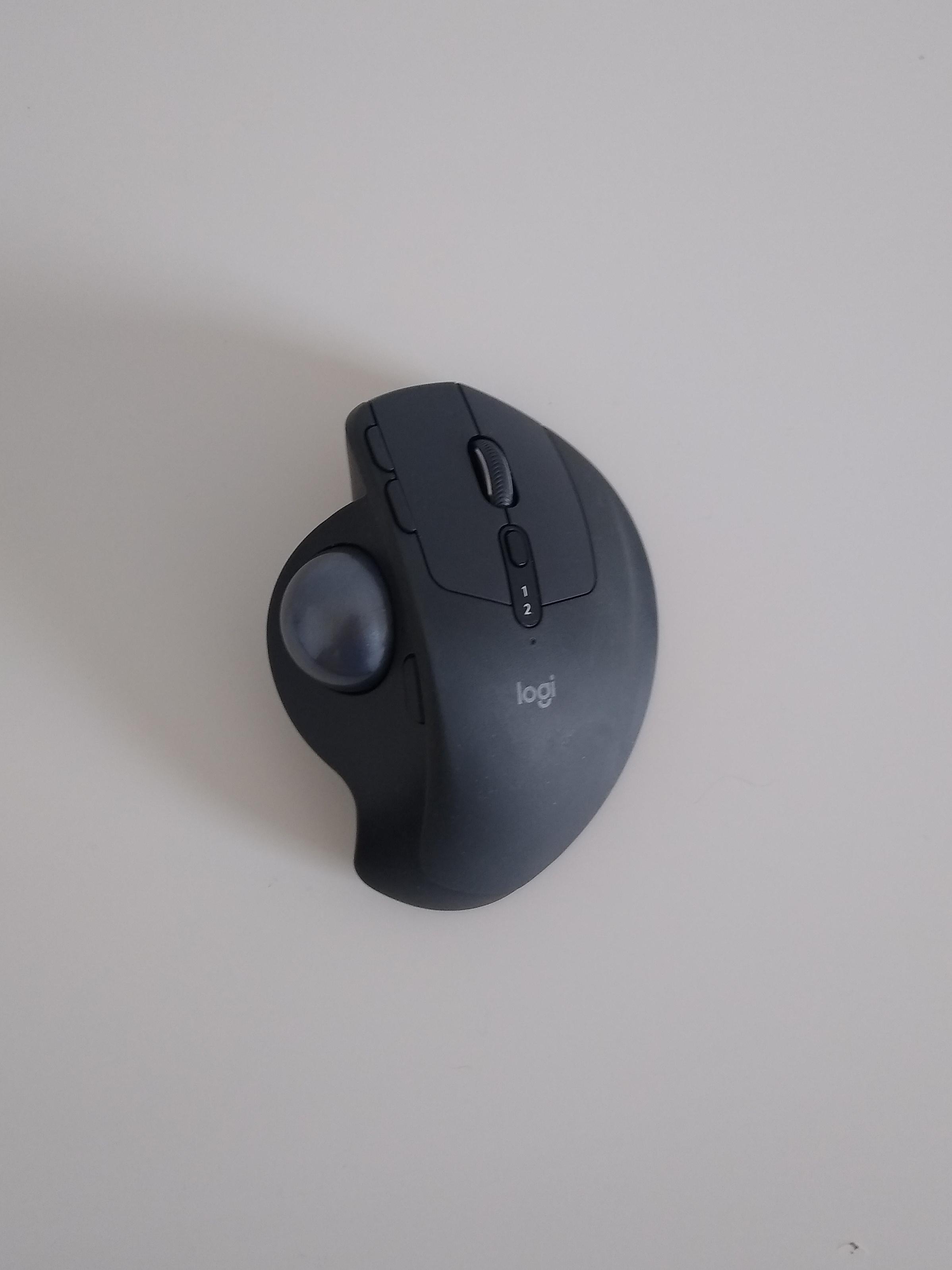 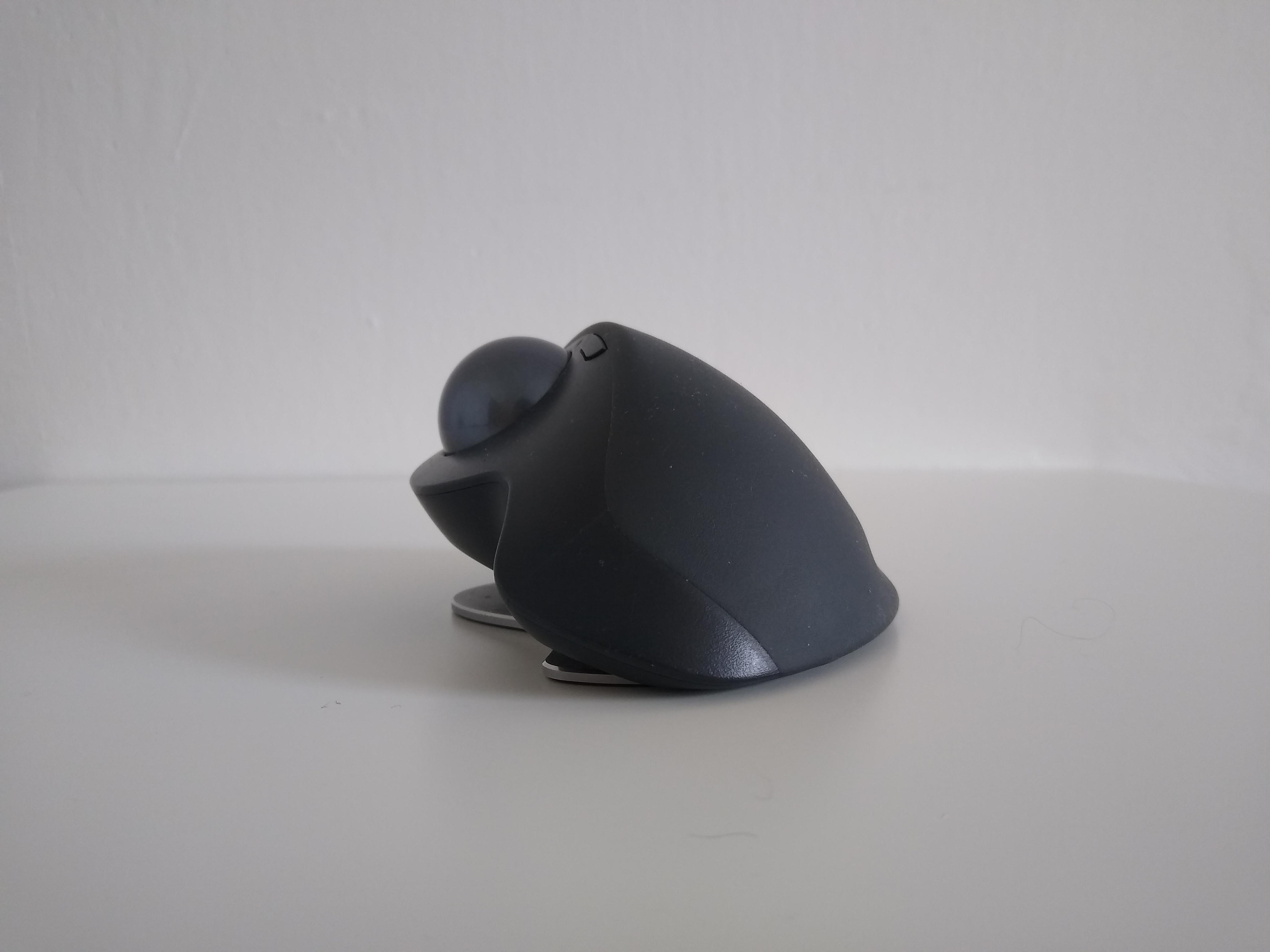 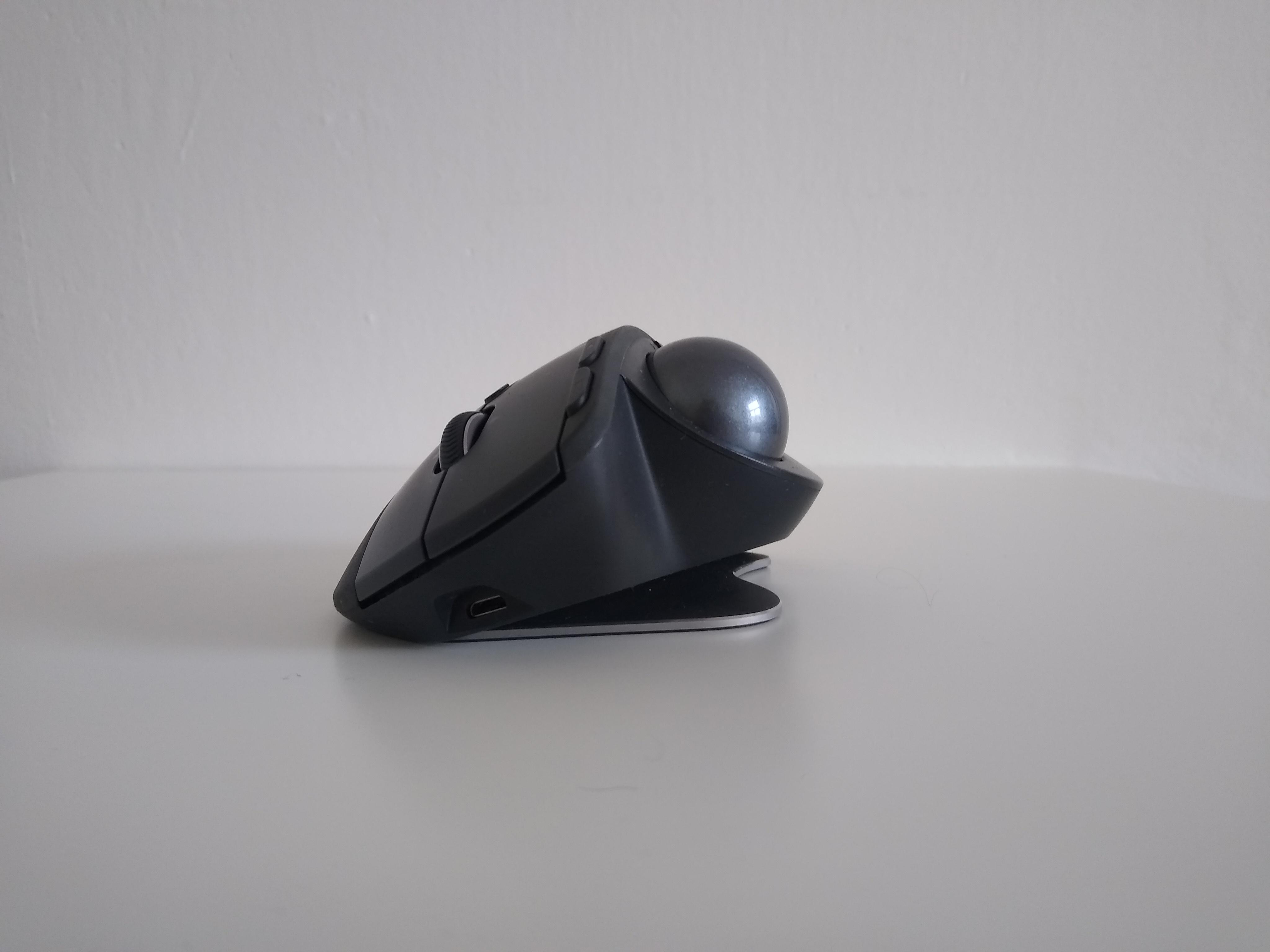 Due to this fact, I got interested in trackballs. I considered the Logitech M575 and the Logitech MX Ergo, which were the only sub-100€ options I could find.

I slightly impulsed-bought the MX Ergo when I found a listing for it for around 60€ on a local second-hand market.

It was the better choice, albeit more expensive, in the long term. I semi-regularly use the customisable tilting, but usually on the higher setting. But since the higher tilt is basically vital for me, I am glad for this feature.

I became a huge proponent of trackballs.

After around 5 months, I started I landed with a repetitive strain injury on my right thumb. A thumb-operated trackball is inherently imprecise – do not let the marketing fool you. On high-precision operations, you have to strain your thumb a lot to achieve the desired accuracy, or you have to use the high-precision mode button, which slows down the mouse speed but also slows down your speed.

This started around the time I signed up for two courses in graphic design after a lengthy break. I realised very soon that you just cannot do graphic design with a thumb-operated trackball unless you want to risk losing your hair and your thumb. 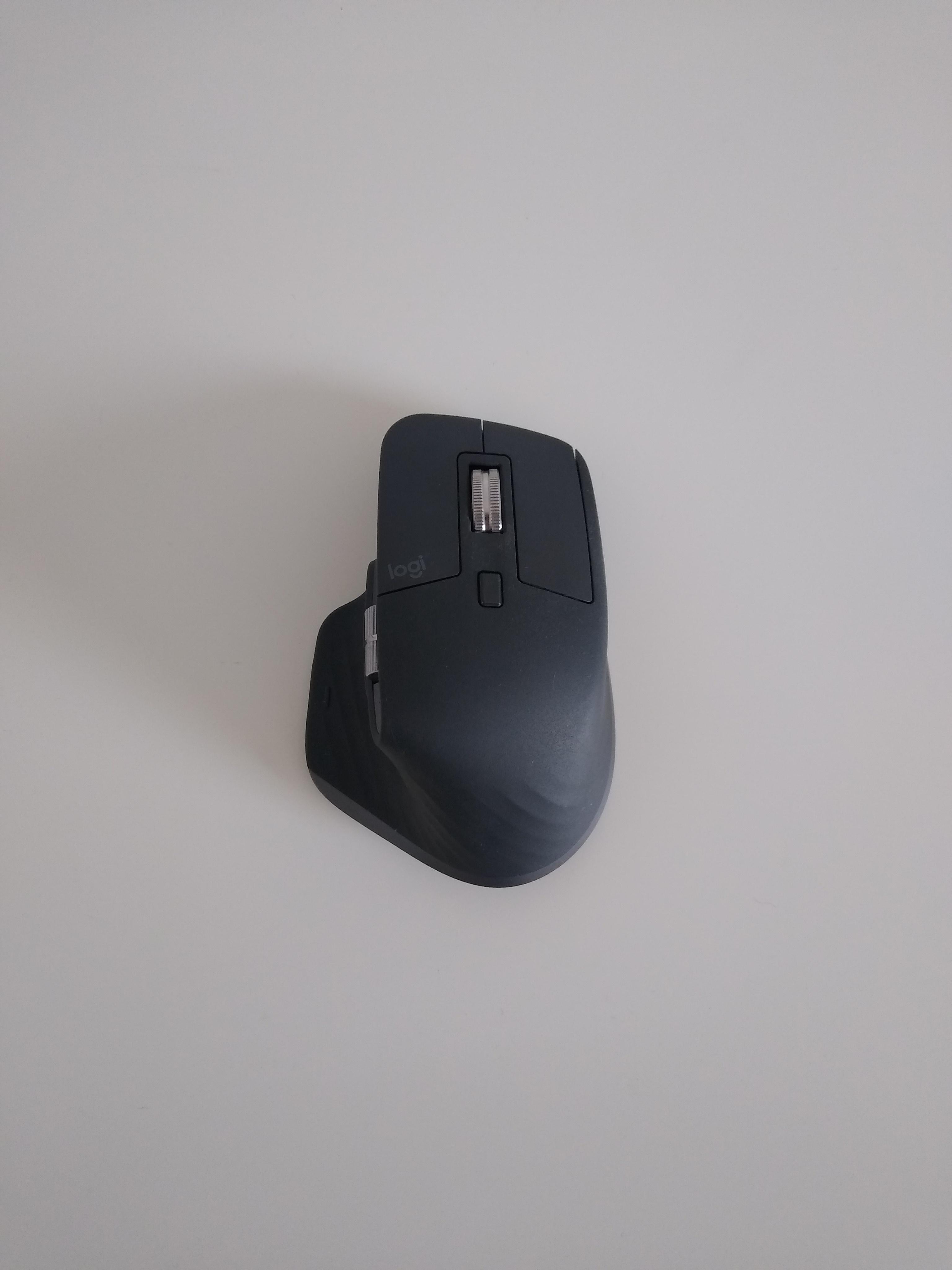 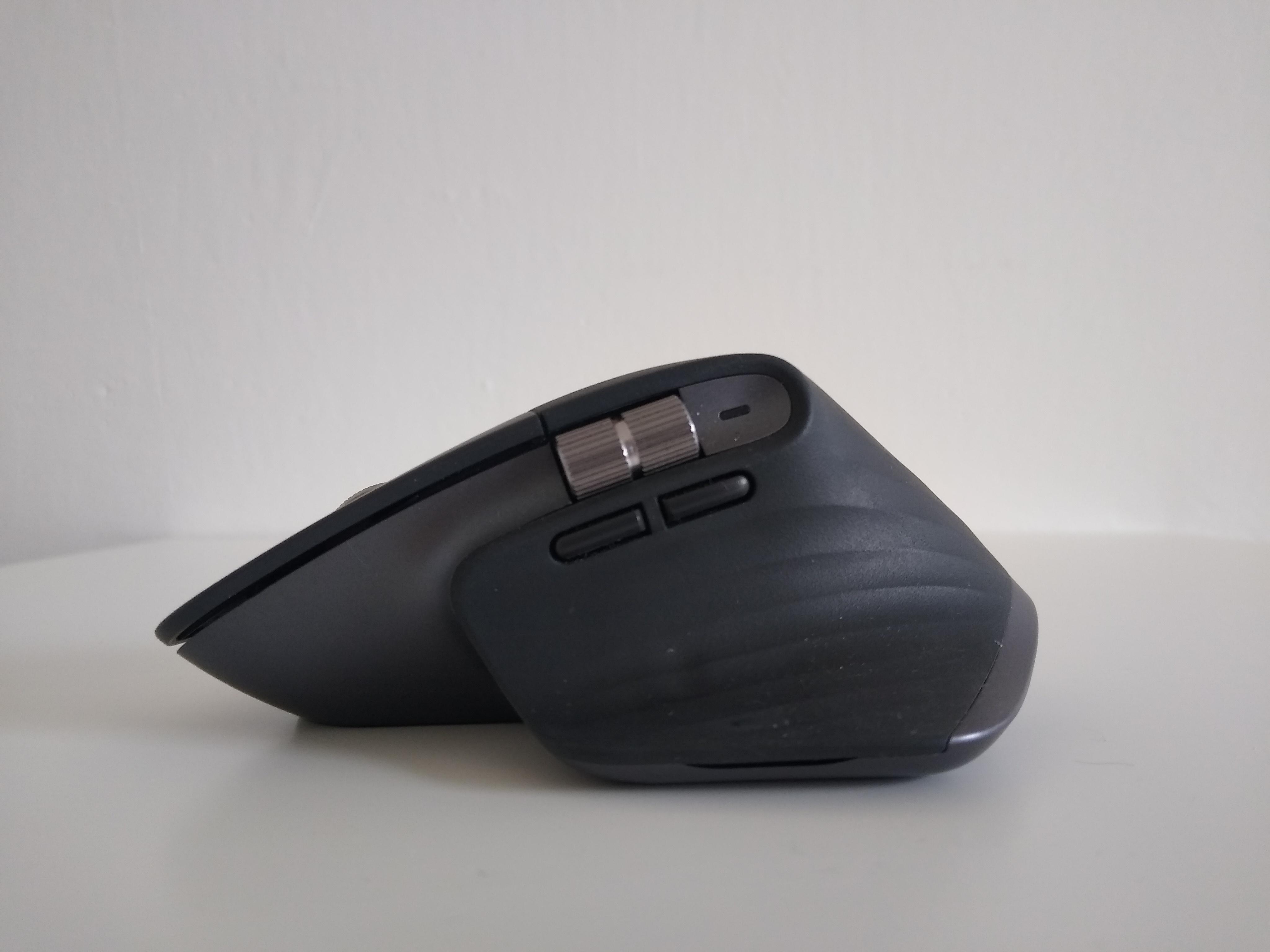 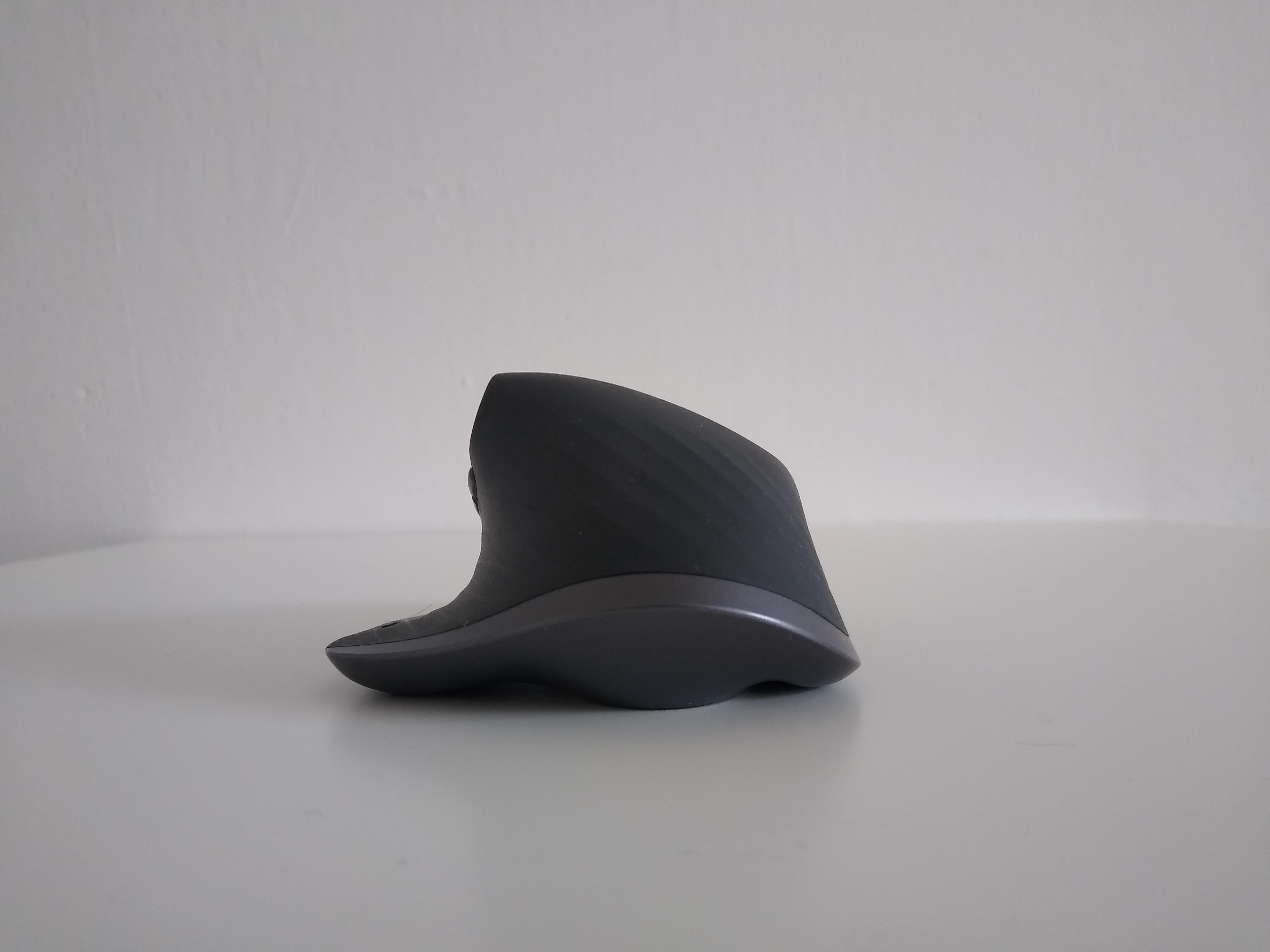 Around this time, I also started experiencing pain in my index finger due to the high amount of scrolling I had to do while working on web design.

Since I needed high precision and a better way to scroll, I started looking at Logitech’s hyper-scroll. I also realised that my past issues with mice were partly caused by their size, which was too small to support my palms, which further incentivised me to try full-size standard mice.

My first choice was the M720 Triathlon, which had the functionality I needed but at half the price. I called off the buy at the last moment as I found out the mouse was too small for my large hands. My girlfriend currently owns one, and she is very happy with it. To my dismay, however, I found that it does not have smart-shift, which would have been a dealbreaker for me, but she doesn’t mind.

I borrowed an MX Master 2S from a friend, and I liked it a lot – it just about fit my hands, but it was lower than I had hoped. I did get my hands on an MX Master 3, and it seemed much higher, so when I found a listing for it for 45€, I bought it right away. 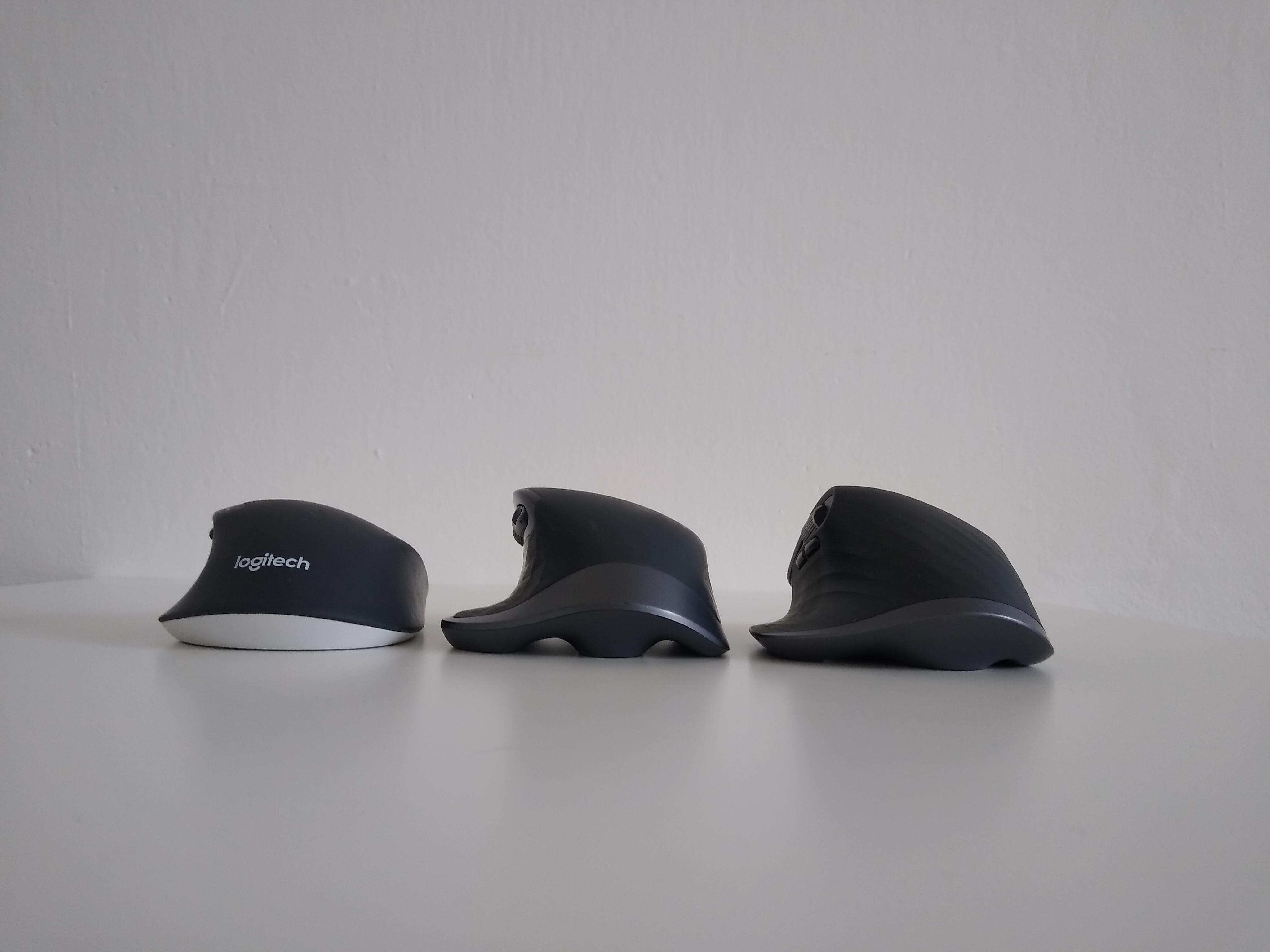 Left to right – M720 Triathlon, MX Master 2S, MX Master 3. While the difference between the 2S and 3 is barely noticeable, the top of the 3 is sharper, which pushes the whole hand up and decreases pronation

It has been a part of my daily driver set for 4 months now. I am not entirely satisfied with the scroll wheel, which is too heavy for me and has a muddy feel due to the magnets. However, while I like the mechanical qualities of the scroll wheel on the 2S, it is too light to be practically used in free-scroll mode, and I do prefer the silence of the 3.

I got this pen tablet as a gift from a good friend when she upgraded to a higher model.

I tried several times to use it as a supplement for a mouse. My experience is mixed.

Using the pen is relatively slow, especially while typing, and can be inaccurate. The driver support on Linux is fine, but not much more. There is no scrolling support, and I did not have time to try to file a bug report for it. I have mainly used this option during transition phases.

Another big disadvantage is that a pen tablet is not very portable, so I usually only use it at my desk.

Of course, I have considered the Logitech MX Vertical, but the price is so high and its features so standard that unless I get it at most at the third of its price, I will never buy it.

I have considered the Microsoft Sculpt Ergonomic mouse, but I am worried that the mouse will be too small for my hands.

Kensington trackpads look awesome but are way beyond my current budget. Maybe sometime.

The single biggest takeaway is that no mouse is a panacea. I currently mostly use the MX Ergo and the MX Master 3; I have even created a travelling case so that they would not get damaged on the frequent hauls to the campus and back. I switch between them as often as every two hours, depending on the signals they send me.

An unforeseen consequence of trackballs is that they are perfect for travelling, especially on trains. You do need little extra space to get the advantages of a mouse workflow – unless you mind the rather bulky weight of the metal plate.

I rarely supplement them with the Trust Verto, which I plan to return in the near future for repairs, and the Intuous.

My pain has stabilised, but it is not perfect. I regularly get finger RSIs and carpal tunnel pain, which brings me to the second part of this article. 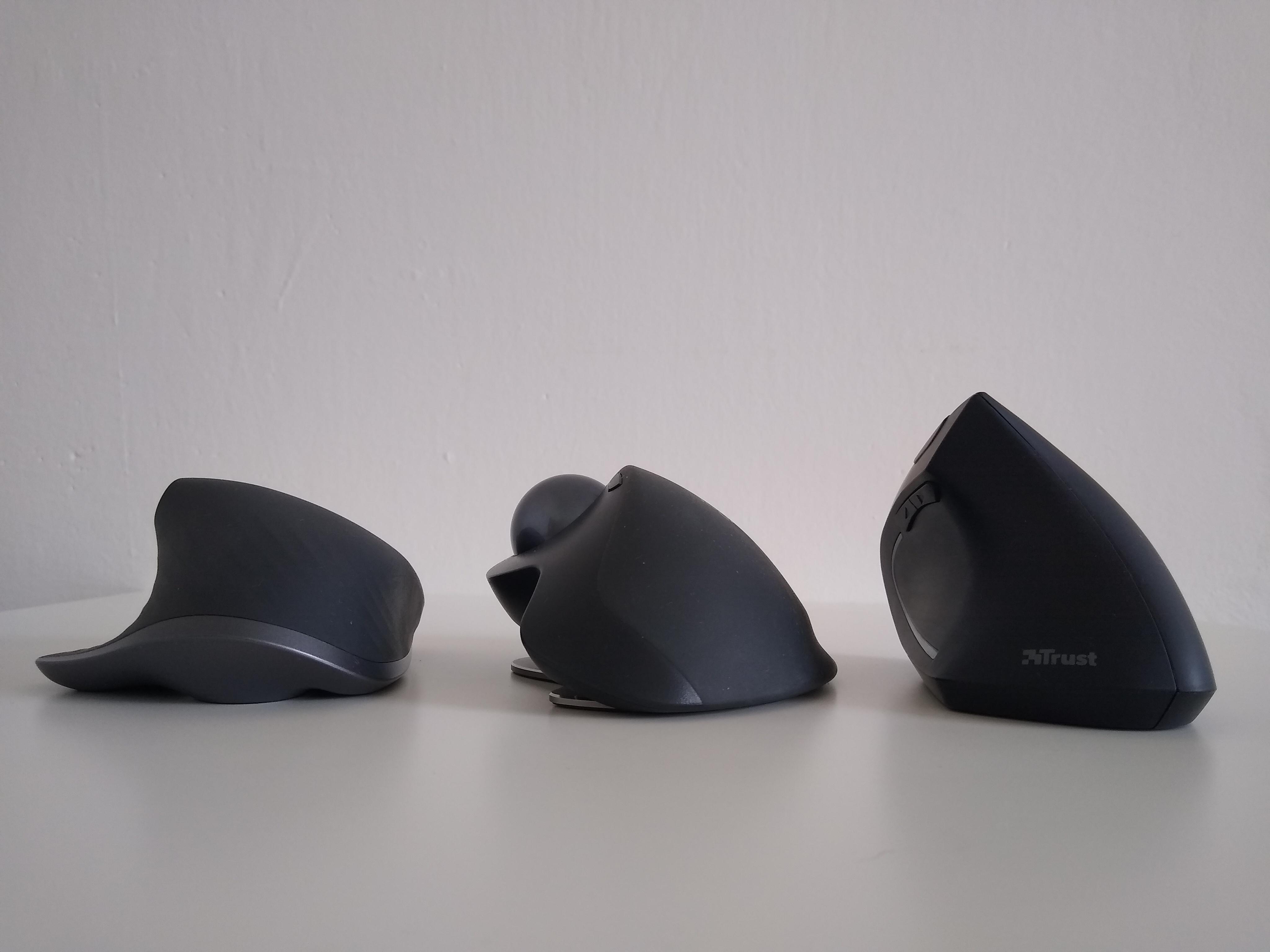 MX Master 3, MX Ergo, Trust Verto. While the first two are quite high, they do not reduce the stress on the carpal tunnel enough for me 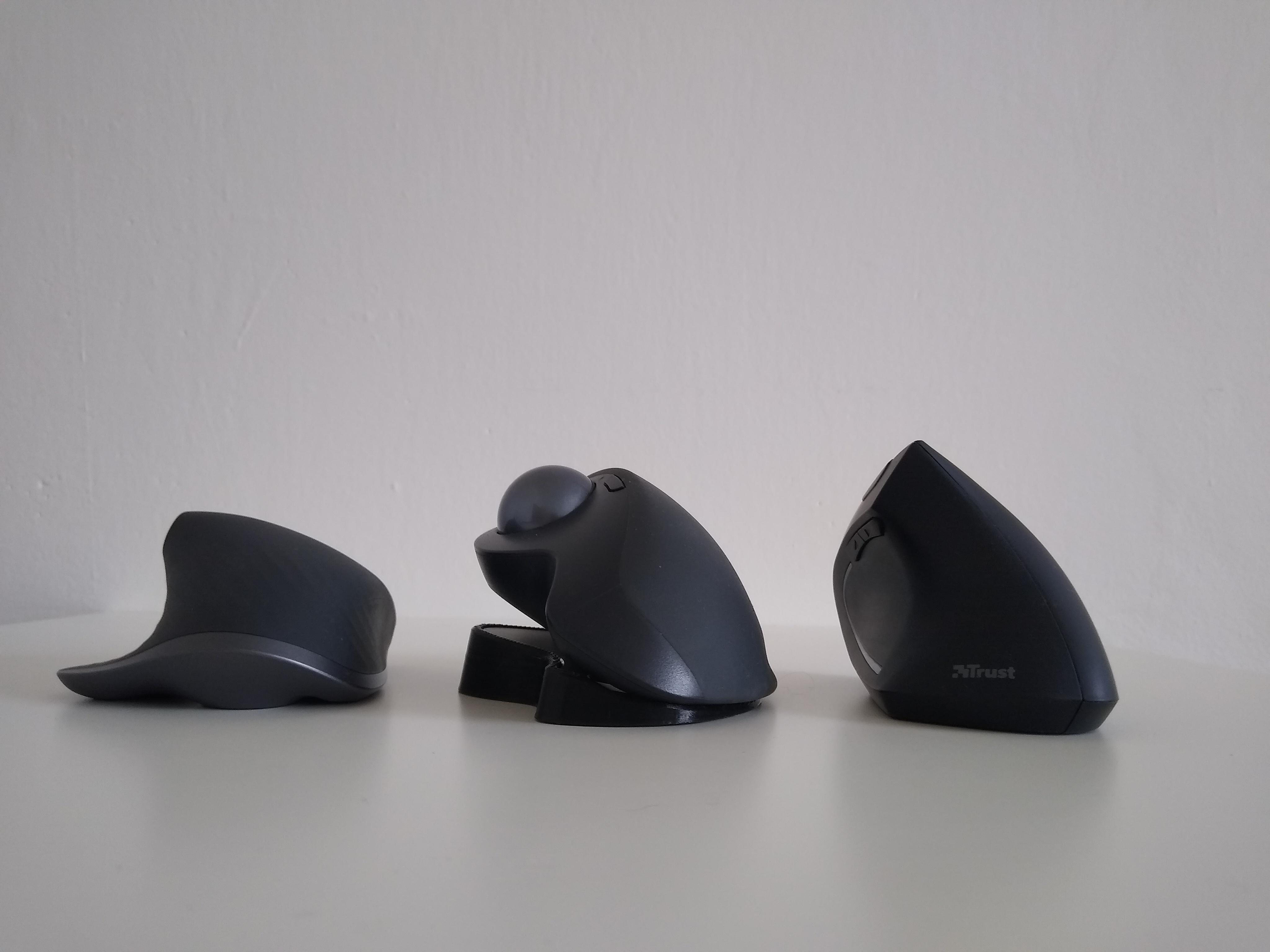 Same as above, but with a 3D-printed stand for the Ergo, which helps the situation a bit 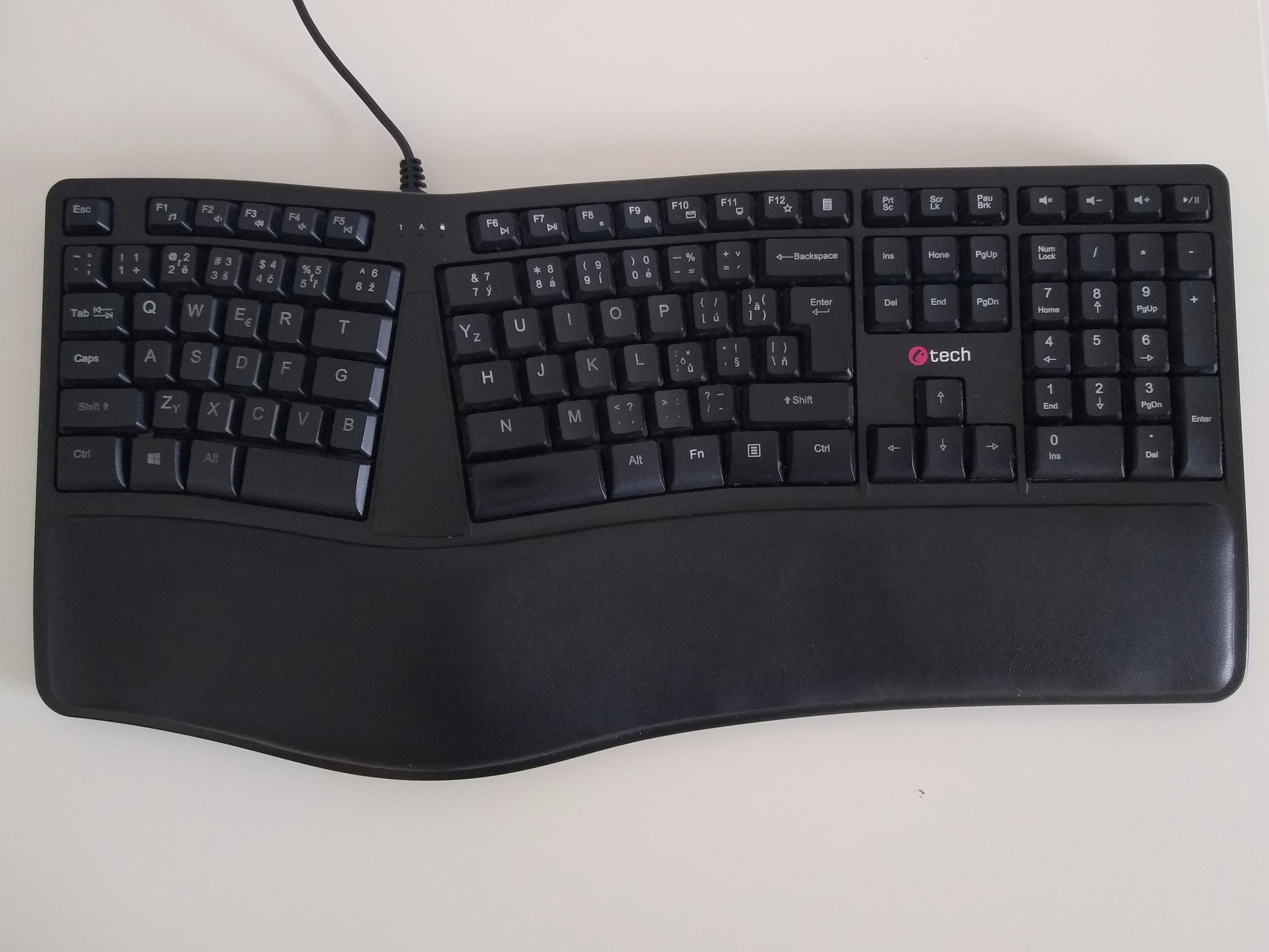 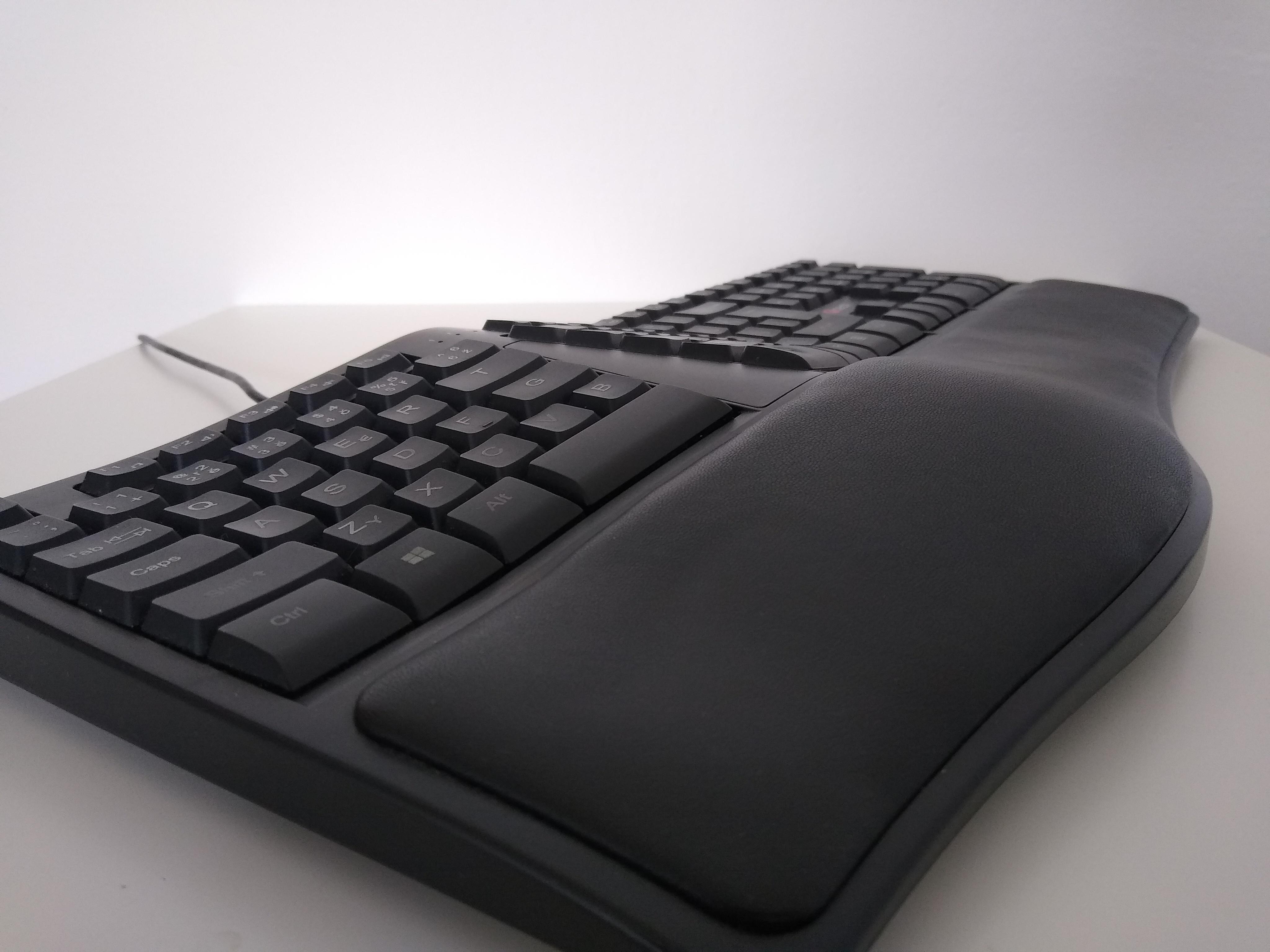 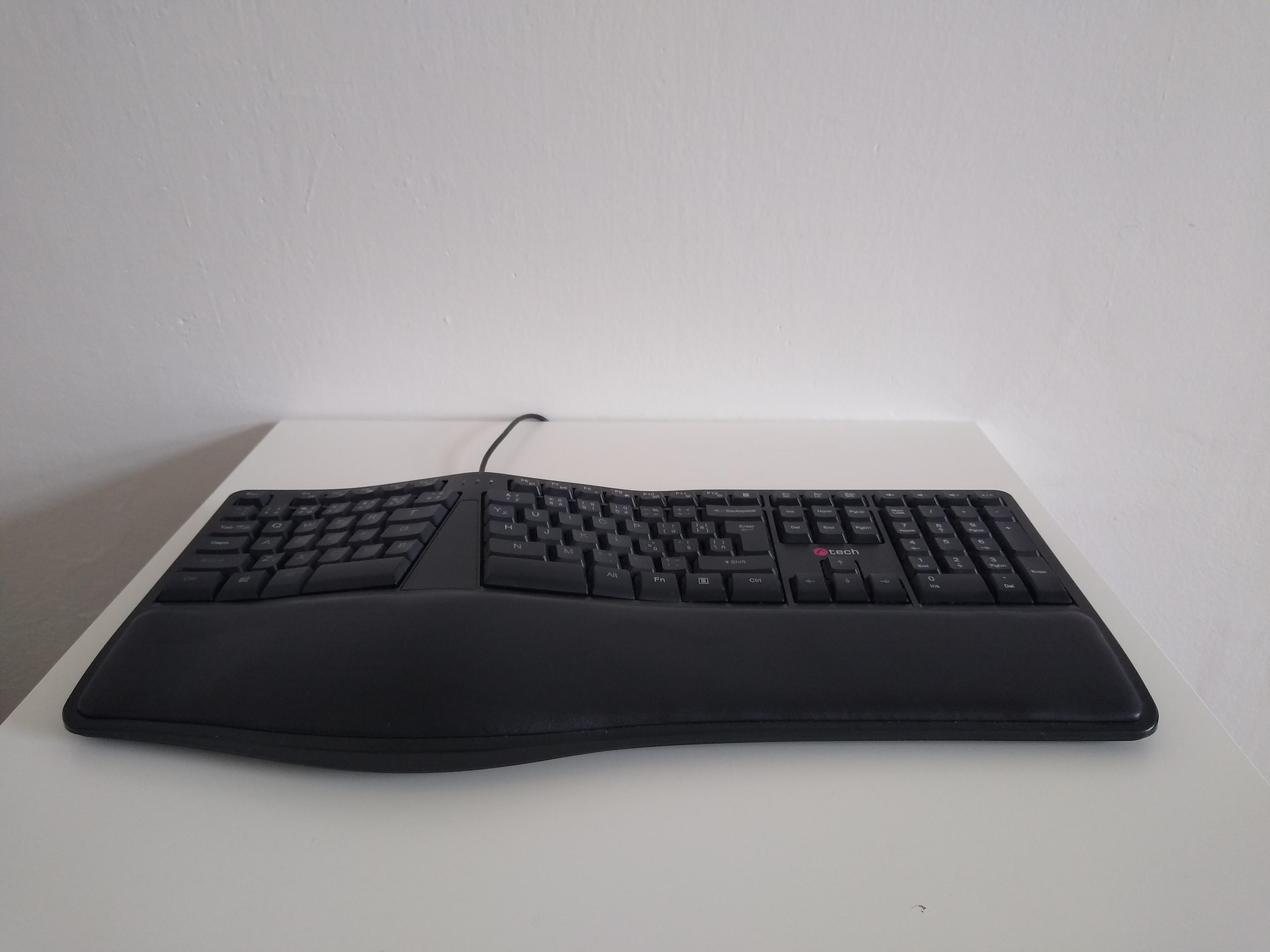 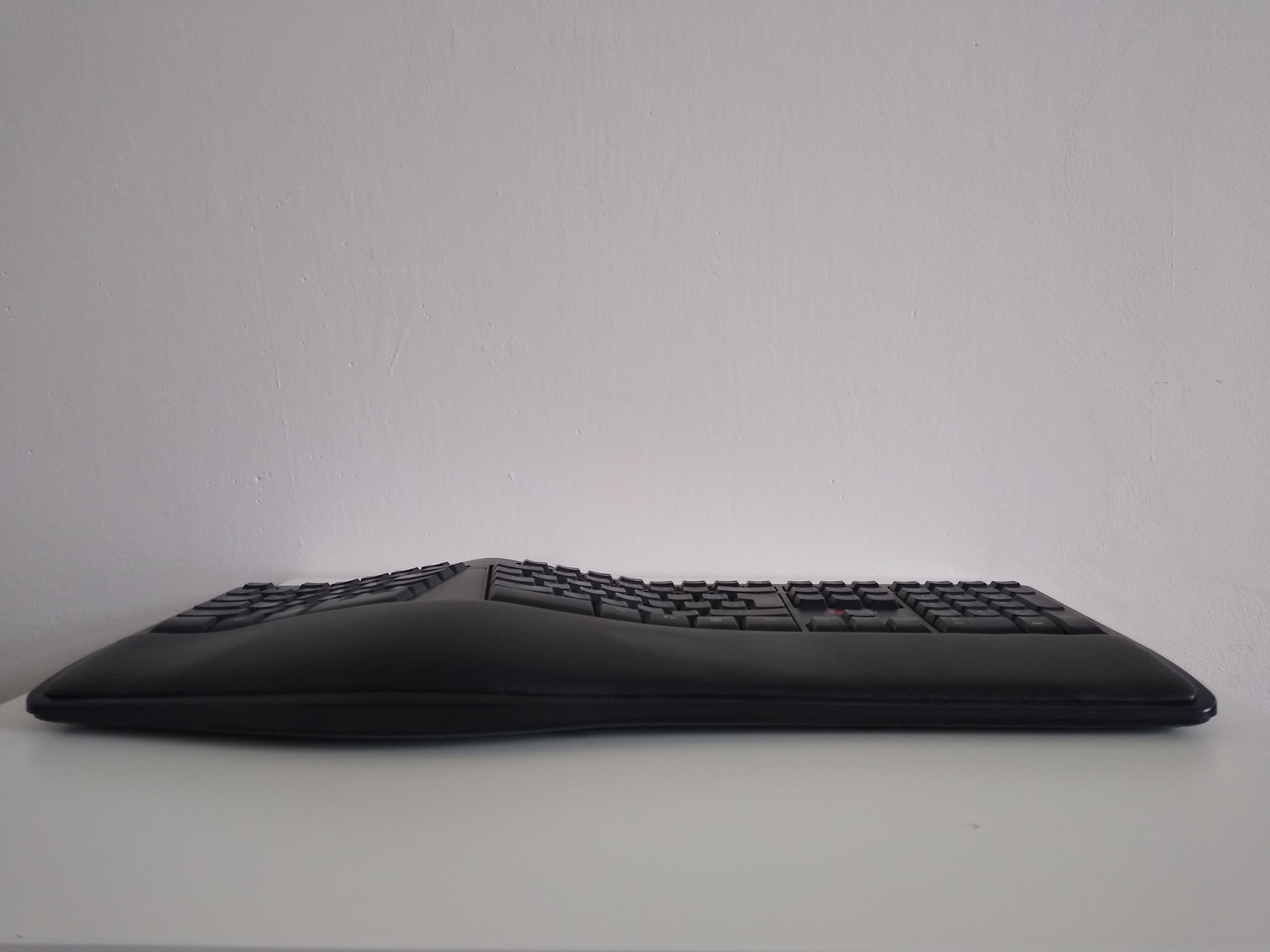 I bought this keyboard for 20€. It was by far the cheapest ergonomic keyboard I could find. It is also by far the ugliest keyboard I have ever seen.

It functions exactly as you would think a cheap membrane keyboard would. The experience is standard at best. It gets the job done, but after 6 months, the palm rests have now permanently moulded into the shape of my hands, the keycaps are shiny, and the apostrophe key either does not work or produces two apostrophes. The tilt is quite small, and the keyboard itself is very large.

However, it was a good introduction to split keyboards. It took me a week or two to get used to it, and I will probably never return to a traditional keyboard.

I have considered the Microsoft Sculpt Ergonomic keyboard, but it cost almost twice as much as the C-Tech, even second-hand, which seemed too much for an experiment.

I reconsidered it since the C-Tech is really wide, and I would prefer my mouse closer, but I have seen reviews, and it seems the keyboard has its quirks – like the large dongle and the Fn switch – and I was unpersuaded it was worth the money.

I am not aware of any other split keyboards in my market.

Last week, I got introduced to the world of custom keyboards. I have not yet chosen which keyboard to build, I am torn between several split keyboard designs, but that is a story for the future.

If you are starting to experience pain, I strongly suggest you start working on mitigating it as soon as possible. I am aware the products in this article can be pretty costly; it is not the only thing you can do.

Changing my devices was only a factor. Changing my habits was an equally large one. E.g., I was influenced a lot by Cal Newport’s Digital Minimalism, which helped me cut down my smartphone habits, which in turn reduced stress on my wrists. I started rigorously applying the Pomodoro technique to enable my muscles to rest between work sessions. I started exercising, which helped my wrist pain as well.

One thing I did not mention is touchpads. In my opinion, in terms of ergonomics, laptop touchpads are the worst input device available. I am careful to always carry a mouse with me nowadays.

If you are reading this, chances are you are experiencing pain as well. I hope the insights in this article will prove helpful to you and that you manage the pain better than I did. To the rest of you – may this be a cautionary tale. Take care! :)